To chip or not to chip -- what is the answer?

A couple of years ago, I started microchipping the street kitties I trap and have altered. I guess I wanted to know if they ever ended up in the wrong hands (aka, animal control), they'd be tracked back to me and they'd be safe. I never knew just how important that chipping would turn out to be.

Twice now, I've been called by animal control stating they had "one of my cats." After comparing notes, I realized these were two of my ferals. I've learned that if someone doesn't want a "stray" cat in their yard, they can catch them themselves or call an animal control officer to pick them up. Our animal control agency only holds feral cats for three days. After that time is up, they are killed. It isn't until right before they go to euthanize that they scan the cat for a chip...it's the law, I guess. It was in those moments, chips were found and I was called.

This has been so interesting to me. I guess I can't blame people for not wanting cats roaming in their yards but what I do get upset about is what happens to the cat when they're at animal control, a facility run by our tax dollars.

A "feral" cat has only three days to "survive" at animal control. After that time, they are killed. Many of these cats are not wild. They may have just been abandoned, lost, or dumped on the street.

When I get the call that one of "my" cats is at their facility and needs to be picked up, I get a list of fees that I have incurred. Since animal control doesn't scan the cat right until time of euthanasia, they've already been there for three days...that's three days of boarding charges for me. Then, I have to pay their impound fee. Then, if I can't find the rabies vaccination paperwork (a lot of backtracking since there are many trappers and many vets), I have to pay the rabies fee.

So, I've not only paid probably around $100 to have said cat spayed/neutered/vaccinated to reduce the homeless population (& save the community money and hassle), I have to pay all of these extra charges once a cat winds up at animal control. On top of that, I have to find a volunteer to go pick up the cat and re-release him/her back to original community from which it is probably banned.

No good deed goes unpunished says my dear friend. So, now what should I do with the next cat I capture and alter? Continue to chip? Throw caution to the wind? 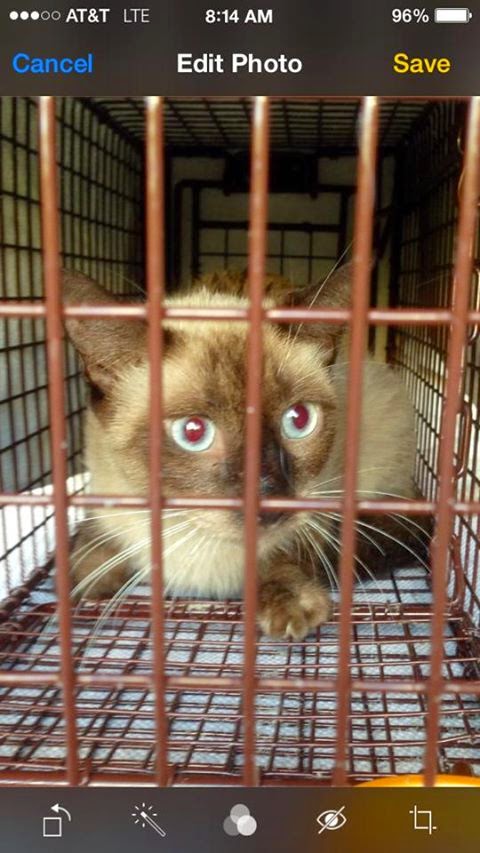 Posted by Animal Matters at 7:58 AM No comments:

Wild horses or a hamburger?

Just saw a piece on NBC about the plight of our country's wild horses. Our infamous Bureau of Land Management (BLM) does these heinous, cruel roundups of these beautiful horses to get them off their native land. The captures are so hard to watch. Helicopters scare the horses to run for miles until they basically collapse. At times, the helicopters themselves are pushing the horses. They're contained in small holding pens where they're injured, trampled, and near death. They're then taken to holding facilities where they have to live out their lives in small areas just like cattle. There are actually more "wild" horses in captivity now than are on their natural land. Why you may ask??

Ranchers who basically own the US government want the federal land for their cattle. Again, I repeat, wild horses are being rounded up, killed and/or imprisoned for the rest of their lives for America's love of cows' flesh. This is just one terrible side effect of eating animals. The ripple effect of your next bite of animal flesh is so far-reaching. One can't even comprehend how destructive their eating habits are. Put the bun, knives and steak sauce down. Think how your actions are destroying others around you. There's a cow and a wild horse who will thank you.
Posted by Animal Matters at 5:11 AM No comments:

How you can help this holiday season.

There is a wish list at Palm Beach County Animal Care and Control (Florida) that I hope we can all help fulfill. If anyone is cleaning out their homes or closets for the holidays, please consider the animals here who have needs.

The list: Newspapers, any type of linens, sheets, towels, blankets, dishwashing detergent - they use Dawn because can use on the animals - kills fleas and removes grease from their coats, but any kind (buy one get one) really appreciated. Stage 1 baby foods, meats and peas and carrots (for bunnies especially when sick after surgery). Canned cat foods, Friskies, Fancy Feast, tuna and ocean white fish flavors. They feed Iams but pickier kitties need more of a "junk food" to get 'em started eating sometimes.

Thanks so much!
Posted by Animal Matters at 4:21 AM No comments:

Allergic to your pet(s)? No need to break up the family.

So you and/or your child is having a rough time with the cats or dogs. I too have major allergies and we have A LOT of both :) We've done some things to make it better around our house. For starters, we built a screened-in enclosure so our cats can hang out there. That helped a lot for my sneezing.

Trust me, it's much better for your cats to adjust to changes in your home rather than in a shelter. Most shelters/sanctuaries are overflowing with homeless cats. They're underfunded, under-staffed and packed. No cat should be in there.

Here are some links to pages with more information on living with cat allergies: http://www.catster.com/kittens/Allergic-to-Cats-How-to-Keep-Your-Cat-and-Your-Health-144 and http://www.humanesociety.org/animals/resources/tips/allergies_pets.html.

Take the necessary steps to keep your pets in your family. Pets are a lifetime commitment. Be a part of the solution -- not the problem.

Posted by Animal Matters at 5:44 AM No comments:

The ethics of cat trapping & feeding

Yesterday was a tough day here at Animal Matters. Although I feel strongly that feral cat trapping is critical in keeping the stray cat population in check, we really get into grey areas when it comes to making decisions about their well-being. It's customary to have the cat tested for Feline Leukemia and AIDS before they're altered. If positive for Leukemia, it's not a good idea (in my opinion) to put the cat back out on the streets. It can be a long, rough illness. Add in the outdoor elements and it's down-right cruel. If positive for AIDS, the cat can live an ok life back out on the streets but there's risk that he/she can spread the disease to other cats and will have a hard time healing from bite wounds or any afflictions. So what's a trapper to do? We made the hard call yesterday & authorized one of our trapped males to be euthanized. This was agonizing. He was a big boy we named "Puff" who was in our managed colony for years. I noticed that he was limping & his leg was red and swollen. He couldn't even put any weight on it. I knew I had to get him in a carrier and to the vet as soon as I could. I was so happy I got him on Monday night! The vet called yesterday to tell me he had tested positive for AIDS. I was shocked! She said that his leg was in bad shape & didn't know if he'd be able to even heal because of the AIDS. The only hope for him to be treated & to recover was to have a quiet indoor spot to go to. That's the problem. I don't have that. I can't even find a foster home for a healthy kitten! Plus, Puff had been in a home years ago & hated being inside. Hence, he was thrown out into this colony. After much deliberation, we let him go. I cried all day. We will have him cremated so he can rest in peace at our home. Just because he lived on the streets doesn't mean he didn't have a family in us. We will miss you "Puff."
Posted by Animal Matters at 5:54 AM No comments:

Last week, my best friends were in town for our annual girls' weekend. While sipping cocktails & chatting about our lives at a cozy hotel restaurant, we saw some stray cats in the bushes. I realize that the life of a cat trapper (me!) really never takes a vacation. My friends knew I mentally checked out of our conversation & was focusing on how to catch those cats. They were right! It turns out the hotel staff had been feeding & looking after the cats. The bellhop was especially sweet regarding the care of the cats. He told me four of them needed to be neutered but they didn't have enough money to get it done. Fast forward a week -- the bellhop and I caught three of the four & I got them neutered. They're currently on my side porch in carriers recovering from surgery. I'll go back over to the hotel in the morning & re-release them. That's always the bittersweet part of my job. There aren't enough homes for all of these cats so the street life is going to have to do. I can take comfort in at least knowing I did my part by getting them altered & making sure they are as healthy as can be to live their lives out on the streets. I'll say a prayer for them when releasing like I always do when letting the felines go. I ask God to guide them, protect them and bless them for whatever time they have here on earth.
Posted by Animal Matters at 11:11 AM No comments:

What we hear. How would you respond?

Below is an email sent to Animal Matters on February 5, 2011 (keeping sender's information private). We responded but wanted to know what you would've said! To Whom it May Concern:

I have a 7 year old Calico Siamese cat who needs a new home. She is extremely friendly and talkative and is the perfect lap cat. Unfortunately I'm unable to keep her anymore because my mom is very allergic and I have to move back in with her. I'm seeking information about getting her adopted and what your facility may be able to do to help this process

If you could provide me with as much information as you can about how you might be able to help me, I would really appreciate it. I'm extremely disheartened that I can't keep her anymore, but I know in the right home she will be very happy.

Thank you very much and I look forward to speaking with you soon.

Posted by Animal Matters at 12:09 PM No comments: